Despite the decline in church attendance over the past three decades and the closure of certain churches, many of these places of worship, the vast majority of which are Protestant and Catholic, are still part of Sherbrooke’s urban landscape. Naturally, the oldest churches are downtown and in the Old-North Ward, but a dozen or so others built between 1900 and 1950 reflect the development of neighbourhoods that are “further afield.” Of these churches, we have chosen four that give us a glimpse into the history and religious customs of the Ville de Sherbrooke.

Sherbrooke’s very first church, built in 1817, was Anglican. Unfortunately, it disappeared from the landscape a very long time ago. Only two testaments to Sherbrooke’s “Anglican period” remain: the Church of the Advent on Rue Bowen which dates back to 1887, and Saint Peter’s Church. 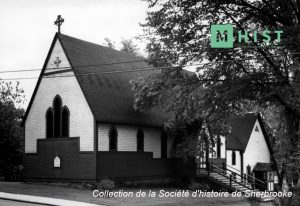 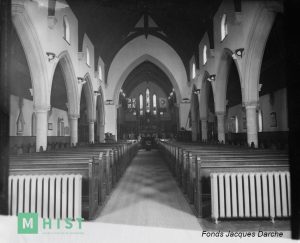 The latter was first built from wood in 1844, then replaced by a brick structure in 1902. It still stands at the corner of Rue Dufferin and Rue Montreal. The neo-Gothic style church on the boundary of the residential and commercial areas of the Old-North Ward welcomes the wealthy Anglican community and is the official chapel of the 53rd Sherbrooke Regiment (Sherbrooke Hussars). Since 2007, it has belonged to the Fraternité Sacerdotale Saint-Jean-l’Évangéliste, an apostolic Catholic order. However, traces of the church’s “old life” are still evident inside the building.

Even though Anglicans were the city’s first influential community, Congregationalists constructed Sherbrooke’s longest-standing place of worship. 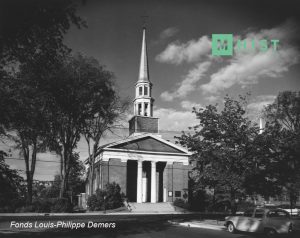 Plymouth Church is also located on Rue Dufferin. It was built in 1855 and is the oldest surviving religious building in Sherbrooke. The two-storey octagonal bell tower and the Doric pilasters and columns supporting the wide triangular pediment are characteristic of the neo-Greek style chosen by architect William Footner. In 1925, The United Church of Canada was formed by the coming together of the Congregational and Methodist churches, and certain Presbyterian churches. Forty-six years later, the congregation of Trinity Church on Rue Court joined those of the United Church to form the Plymouth-Trinity Church. The building was classified as a heritage building in 1989, which protects the integrity of its exterior architecture as well as its stained-glass windows.

Before the 1860s, the Catholic population in Sherbrooke was a minority. In 1829, the first Catholic church, dedicated to Saint Colomban, was built on the present-day site of the Sherbrooke Seminary to welcome Irish Catholic immigrants. However, in 1855, due to growing demand, a new church in honour of Saint Michael was built across the street. From the 1850s onwards, the steadily growing French-Canadian population reflected Sherbrooke’s demographic location, the city’s urban development and the establishment of various Catholic parishes. During subsequent decades, these parishes were located farther from the downtown core, unlike the Protestant parishes in the city centre or nearby suburbs.

Around 1900, there were only three Catholic churches in the city that served the three parishes of Saint Michael (Rue Marquette), Saint John the Baptist (Rue du Conseil) and Saint Patrick (Rue King Ouest). There were seven parishes in 1930 and 20 in 1970. 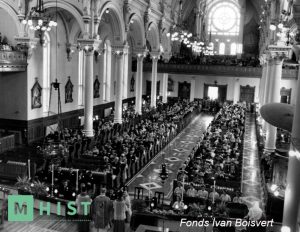 known as the Eastern cathedral for the past century, was inaugurated in 1908 to meet the parish’s need for more space. The church’s architecture is inspired by both Gothic and Romanesque styles. Its impressive acoustics and Casavant organ make this place of worship a heritage must-see for residents of East Sherbrooke and the surrounding region.

On the west side of the city, Petit-Canada, home mainly to French-Canadian artisans and day labourers, was quickly developed during the early 20th century. More and more apartment buildings were constructed, and they proved more popular than the little detached homes that once dominated the area. Naturally, when a neighbourhood was developed, a new parish was founded. One year after the parish of the Immaculate Conception of the Blessed Virgin Mary was founded, the parish church with its little bell tower was opened in the basement of a building on what is now Rue Adélard-Collette. The congregation had to wait until 1932 to see their neo-Gothic-inspired church completed. It is still a feature of the neighbourhood landscape.

Over the last two decades, several parishes have ceased their activities. While the churches of Christ the King (1940-2008) and Saint Teresa of Avila (1922-2000) were repurposed, others including Saint John Brébeuf’s Church (1946-2006) were less fortunate, and eventually demolished.