The urban development of a city is profoundly influenced by its industrial growth and Sherbrooke is no exception to this rule. Between the 1830s and 1850s, there were several manufacturing attempts in Sherbrooke driven by BalCo (British American Land Company) which did not always deliver the desired results. Sherbrooke’s industrial revolution truly began in July 1867 when the Paton textile factory was inaugurated.

The Magog River Gorge has always been a vital cradle of Sherbrooke’s economic development, from the early days of the hamlet to the development of the hydroelectric network. Over the decades, dozens of factories were built along the riverbanks. These factories experienced varying levels of success, but they all benefited from the hydraulic energy produced by the river’s dams (between 3 and 6, depending on the period). These factories include The Paton (1867 to 1978) on the corner of Rue Belvédère and Rue King, the Silver Spring Brewery (1896 to 1927) on what is now Rue des Abénaquis, and the Eastern Townships Corset Manufacturing Co. (1886), which was located beside the river downstream from dam No. 4 (now the Abénaquis dam). 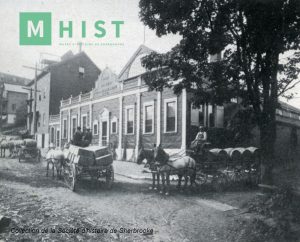 When the 1890s heralded the arrival of electricity (Frontenac power station, 1888), factories no longer had to be close to the energy source. Between 1895 and 1910, they gradually moved away from the banks of the gorge and closer to the stations on Rue du Dépôt and Rue Minto (as of 1909) in particular, to facilitate the distribution of their merchandise. For example, the Jenckes Machine Co. plant relocated from the gorge in 1891 to Rue Lansdowne, as did the Canadian Rand Drill Company plant in 1896. The Canadian Rand Drill factory later moved to the Rue Belvédère Sud sector (1896) and became Ingersoll-Rand in 1912. This metalworking plant was one of the city’s largest employers for decades. The company ceased its operations in 1994.

In contrast, certain business owners decided to set up their operations in the former industrial zone as the majority were moving away. One example is the Panther Rubber Co. which began operating on Rue Bank in 1913. Incorporated into American Biltrite in the 1950s, it is currently the only plant still in operation in the city centre. A new Julius Kayser factory, the first reinforced concrete plant in Sherbrooke, was built on the opposite shore, on Rue Frontenac in 1918. The factory, which manufactured silk hosiery in particular, was operational in this location until 1988.

The West District benefited from the relocation of the industrial zone, as several factories moved into the Canadian Pacific Railway station. They included Connecticut Cotton Mills (1913), which later became Dominion Textile (1928), and Canadian Silk (1925) on Rue Drummond (now Rue Galt Ouest). Canadian Silk is also known as “Munster,” in reference to a manager, by a generation of working women. 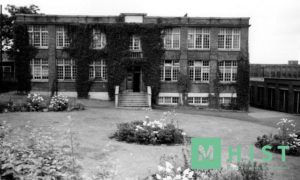 To find out more, please visit our virtual exhibition entitled Back to your machines! and come see our Sherbrooke memories and 150 years of urban history exhibitions in person when we reopen!