But I am sure I have always thought of Christmas time […] as a good time; a kind, forgiving, charitable, pleasant time; the only time I know of, in the long calendar of the year, when men and women seem by one consent to open their shut-up hearts freely, and to think of people below them as if they really were fellow-passengers to the grave, and not another race of creatures bound on other journeys.

With its multiple adaptations over several eras and, more recently, by Mickey Mouse, the Muppets, Bill Murray and Disney, the celebrated nineteenth-century story A Christmas Carol still inspires us to dream and is indissociable from Christmas. Why? Firstly, because it has become a classic among end-of-year celebrations, but particularly because this tale hasn’t aged a bit. On the contrary, it depicts a society that centers money and capitalism to the detriment of its most needy. It puts in question its protagonists’ ways of living through the eyes of the ghosts of Christmas Past, Present, and Future, at a time when everyone is taking stock of the year that has passed and deciding on their resolutions for the next one to come.

Epilogue of a Christmas philosophy 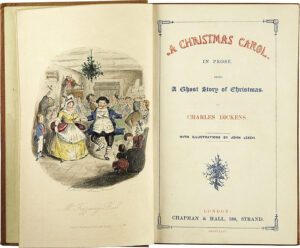 During the nineteenth century, the growth of the bourgeoisie meant that Christmas was a time for large family gatherings with children at their center. As a result, the education of this small and growing society was all the more important, and Dickens echoes this concern for empathy and community solidarity in his story. While Germany played a pivotal role in building the ritualization of Christmas, England created what is known as the “Christmas Spirit.” But beyond its elitist appeal, literature played a predominant role in building the Christmas we know today.

English author Charles Dickens (1812-1870) wrote his work in 1843 and despite its age, the tale endures over time and is still central to modern Christmas celebrations, not least because of its timeless message. The main character, Scrooge, is a greedy man who hoards his money in a malicious way. Scrooge finds himself on Christmas Eve facing three ghosts who present him with his past and present actions; if he continues on the path he has set for himself, they will cement the man he is and lead him to a tragic and lonely end. After that disturbing and frightening night, Scrooge is filled with the spirit of Christmas. In the early hours of Christmas, he prepares gifts, donations and food to share with friends.

Encouraging at once generosity, sharing and the spirit of charity, Dickens, through his three ghosts, develops a true “philosophy of Christmas” and transforms this religious celebration into a more earthly one. Beyond the social critique of industrial England, the key moment of the story certainly remains the Cratchit family dinner which models the traditional family meal, modest certainly, but warm, loving and joyful which, at the time, charmed Victorian society. This Christmas spirit makes one forget the misery, disease, workers’ strikes and poverty engendered by English industrialization in the nineteenth century, for the benefit of the family and the joy of reuniting. Dickens thus promotes happiness, the innocence of childhood, charity, human warmth and “moral regeneration”—that is to say, a new chance to do good and to become a better person, like Scrooge does. The book, upon its publication on December 19, 1843, won everyone’s hearts and Londoners were captivated. Even the critics of the famous author can only praise his genius.

By the end of the nineteenth century, the spirit of Christmas, brilliantly exemplified in Charles Dickens’ Christmas Carol, spread across Europe and America. In 1892, the Examiner—an English-language Sherbrooke newspaper—published a message from the merchant J.R. McBain, who referred to the writings of Dickens and Shakespeare to offer his customers his best Christmas wishes.

Much more than a story, some consider the story to be a true “blessing.” Notably, a reader of the Sherbrooke Daily Record underlines the importance of Dickens during the holiday season of 1911, calling A Christmas Carol a “masterpiece of Christmas literature” and urging “all Christmas pessimists” to read it.

Beyond these few examples, the tale has been shared in many different contexts during the twentieth century, notably on the radio, during special events, in the theater and even in certain sermons. In fact, on Christmas 1929, with the city in the throes of the stock market crash, the Sherbrooke Daily Record celebrated Dickens’s tale as “the appropriate story for this season” where people needed help from one another.

Even today, Dickens’ tale is still relevant: both the original text and the many adaptations have been integrated, over the decades, into our Christmas traditions, as well as the values ​​of charity and generosity that the story advocates. Several initiatives have also been put in place to help those in need during the holiday season, which is meant to be a time of celebration: think of the Scouts and firefighters’ toy drives, the dinners organized by the Dames de la Charité, the traditional Christmas tree ceremony at the centre de Rehabilitation or even Arthur and his Work—set up in 1954—which distributed food to people who needed it. In 1980, it was Rock Guertin’s turn, following a radio appeal, to mount his massive Paniers de l’Espoir campaign; over forty years later, the Rock Guertin Foundation still distributes Christmas baskets to more than 2000 households during the holidays, Easter and at the beginning of the school year. It just goes to show that generosity is not exclusive to Christmas!