During the exhibition “Light on the Echenberg Family Fund,” the Mhist – Musée d’histoire de Sherbrooke officially launched the book “The Echenberg of Sherbrooke and Ostropol : A tale of two Shtetls”, a project by Dean F. Echenberg. 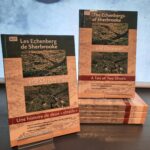 More than 60 members of my Echenberg family emigrated to Sherbrooke at the turn of the 20th century. They all came from a remarkably similar small town called Ostropol, in what was then the Russian Empire and is now part of Ukraine. In Sherbrooke, they were able to reproduce, in large part, the life they had left in their old country and, very quickly, they began to prosper. This book tells their story in Ostropol, in Sherbrooke and how I came to write the story.

Myron Echenberg and Ruth Echenberg Tannebaum wrote a monograph of the Echenberg family in the 1980s. The new book is enriched by the research of Dean Echenberg, and Deborah Glassman, who notably went to the recently opened Russian archives to discover the origins of his family.  Dean Echenberg also reflects on his early life in Sherbrooke and how he came to write the book.

In Sherbrooke, apart from the cemetery on Rue des Souvenir and the former synagogue on Montreal Street not much is left of  Sherbrooke’s Jewish community.  “This community, with the Echenberg family at its center, was involved in many  spheres of Sherbrooke society: they owned several businesses on Wellington Street, they help build the synagogue, they were involved in many  social circles and held military positions,” said the author, Dean Echenberg.

The Jewish community of Sherbrooke is put back in its historical context thanks to the preface of Professor Pierre Anctil : “As in many medium-sized cities in North America, the Jewish community, which had up to 360 members in Sherbrooke around 1920, slowly declined in favor of a migration to major centers such as Montreal and Toronto”.

“The Echenberg family archives, which we are currently highlighting at the museum, and this book by Dean Echenberg and his colleagues, are essential to have a more complete portrait of local Sherbrooke history and especially to understand the communities that have forged our city”, said David Lacoste, director of the Mhist.

The book “The Echenberg of Sherbrooke and Ostropol : A Tale of Two Shtetls”  is published by the Musée d’histoire de Sherbrooke. It is currently on sale at the Mhist (275 Dufferin street) as well as at the Librairie Appalaches (which occupies the same place as one of the former Echenberg stores on Wellington Street North).