Intangible heritage was only officially defined recently—about 15 years ago—even though we have questioned how to classify and quantify the value of skills, knowledge and other intangible but revealing cultural elements since the 1970s. For many years, intangible heritage was assimilated into and reduced to folklore, but it recovered its prestige following the drafting of a definition by UNESCO during its Convention for the Safeguarding of the Intangible Cultural Heritage in 2003. The definition now places intangible heritage on the same level as other kinds of cultural heritage. Using this starting point, it falls on the various levels of government (national, provincial, regional, cities, towns and villages) to recognize and showcase the significant elements of intangible heritage. Acupuncture (China), Flamenco (Spain), Reggae (Jamaica), Mariachi, string music, song and trumpet (Mexico), Processional giants and dragons (Belgium and France), and Nsima, culinary tradition of Malawi (Malawi) are all on the Representative List of the Intangible Cultural Heritage of Humanity. As of yet, there are no Canadian elements of intangible heritage on this list.

In Quebec, the Cultural Heritage Act of the ministère de la Culture et des Communications du Québec [Department of Culture and Communications], adopted in 2012, opens the door to the recognition of various distinct skills and know-how that are unique to Quebec history and culture. Assomption sash weaving, Tikinagan (Indigenous cradleboard) making, and ice-canoeing in Montmagny are all listed in the Répertoire du patrimoine culturel du Québec [Quebec’s Cultural Heritage Directory].

SHERBROOKE’S INTANGIBLE HERITAGE: VARIED, DYNAMIC AND ROOTED IN THE PRESENT

Inspired by what was proposed by UNESCO and the MCCQ, the Ville de Sherbrooke adopted its Politique du patrimoine culturel [Cultural Heritage Policy] in 2013. The groundwork was then laid for the inventory and recognition of built heritage (since 2017), movable heritage (since 2018), and intangible heritage (since 2016). Intangible heritage is defined as an element that “includes a set of knowledge and skills that is transmitted through learning, accounts or tradition and that continually evolves, which contributes to a group or community’s sense of identity and continuity.”

Therefore, the elements of intangible heritage are indeed alive and can be discovered through observation and experimentation. As a result, the elements are changed through the actions of those who practice them. They are rooted in the present and they become intergenerational and intercultural. They reflect the specific nature of the traditions and rituals that make up the local identity and reflect both past and present sociohistorical realities.

In 2016, Marie-Blanche Fourcade, an ethnologist, produced the first inventory of Sherbrooke’s elements of intangible heritage. Fourteen elements grouped into 6 categories figure on this list. 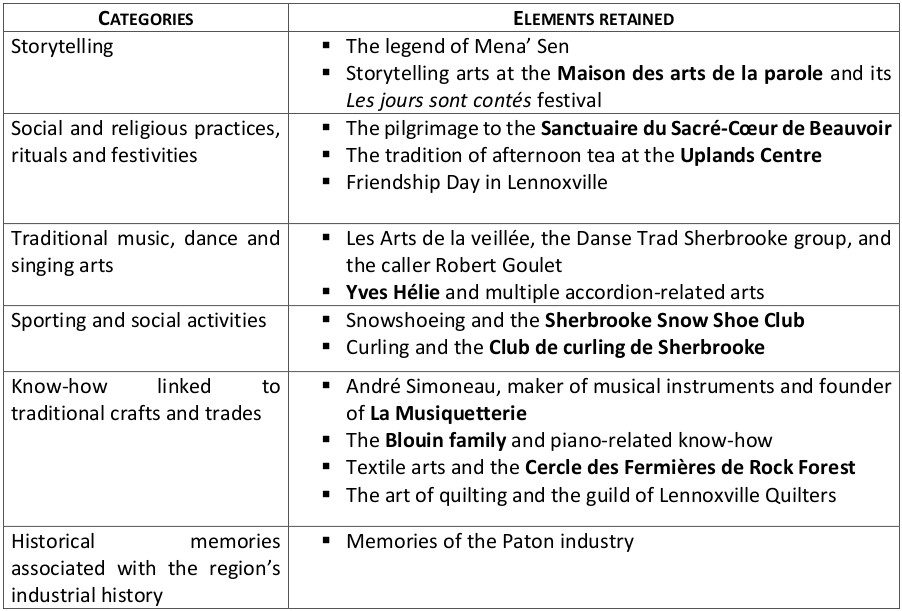 Since 2017, thanks to funding that stemmed from a cultural development agreement concluded between the Ville de Sherbrooke and the MCCQ, the Mhist has been mandated with contributing to the showcasing of Sherbrooke’s intangible heritage. Several initiatives have been rolled out, including the publication of an information brochure, the organization of an event at Place Nikitotek during the 2018 Journées de la culture, participation in the Festival des traditions du monde (Summer 2018), the participation of André Simoneau (2019) and Danse Trad (2018 and 2019) in L’histoire fait son marché, storytelling activities organized by the Maison des arts de la parole (SSRI, November 2019) and traditional music with Yves Hélie (December 2020).

An immersive version of the legend of Mena’ Sen has also been added to the museum’s permanent exhibition entitled Sherbrooke memories.

During this period of uncertainty, the Mhist is unable to confirm its upcoming schedule of workshops, displays and public performances for Summer or Fall 2020. However, this certainly doesn’t mean that we are putting aside our intangible heritage! Over the coming weeks and months, we will publish content on various elements of Sherbrooke’s intangible heritage that will make you better acquainted with and more appreciative of these elements, artisans and bodies that boast rare know-how and skills that make up our regional culture and heritage. Furthermore, since these elements are not static and constantly evolve, we will also produce video clips over the coming year that will allow you to see these elements of our intangible heritage “in action.”